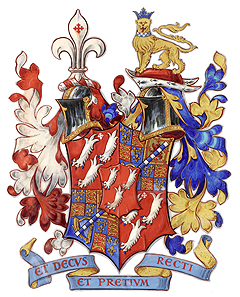 The Arbury Estate has been the property of the Newdegate (later also Newdigate) family since 1586. Having passed through several branches of the family to Sir Roger Newdigate who inherited the Estate in 1734 at the age of 14 and who was to reign at Arbury for 72 years and was responsible for the house receiving its present character and appearance.

Sir Roger Newdigate is perhaps best remembered principally as the founder of the Verse prize at Oxford that bears his name.

In 1742 he returned from his Grand Tour, where he had made drawings of famous buildings and also collected sculptures.  Six years later he began making preparations to rebuild Arbury.  It remains a mystery why he chose the Gothick rather than the Classical style, but it must be remembered that the 1740s witnessed a reaction against the strict classicism that had dominated English architecture.  Sir Roger’s alterations to Arbury seem to have been completed by about 1805, and the house has remained almost exactly as he left it until the present day.

The Estate was eventually inherited by Sir Francis Newdigate Newdegate who was succeeded by his elder daughter who in 1950 passed it over to her son Humphrey FitzRoy Newdegate.  He became the 3rd Viscount Daventry in 1986, inheriting the title from an uncle.